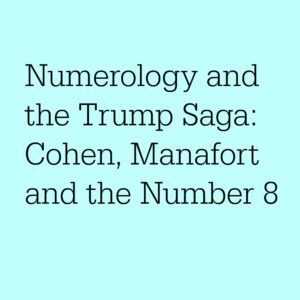 Like many people, I was riveted today to the news that the trial of former Trump campaign chairman Paul Manafort was coming to an end. Then, when news broke that Michael Cohen, Donald Trump’s former lawyer, was pleading guilty, I knew I’d be glued to the cable news channel all night. But something jumped out at me amidst the coverage: the number 8 kept popping up.

First, I saw that the jury in the Manafort trial only came to an agreement on 8 counts, despite the fact that they were deliberating over 18 counts. And then, making matters more interesting, I learned that the jury’s decision meant that Manafort could get up to 80 years in prison. Yet another reference to the number 8.

Then, when we learned more information about Michael Cohen’s guilty plea, we learned that he had pled guilty to 8 counts.

One of the most important rules about strengthening psychic ability is to pay attention to patterns. When something repeats itself, that’s a sign for you to look closer. Numbers, in particular, often have a lot of meaning. If you see a number repeat itself, there’s a good chance that number is a message from the Universe.

Always one to look for synchronicity, I knew that it was important to note that the number 8 was all over today’s political events so I decided to think about whether the number might have a special message for us about the future of American politics.

The meaning of the number 8

Numerology is the study of numbers and how those numbers affect our lives. With an understanding of numerology, we can discover more about our purpose in life, our biggest challenges and whether we’re on the right path.

Certain numbers have a special allure. The number 8 is one of them. One of the most common meanings is that of infinity or resurrection. But in order to truly understand the power of resurrection, you have to understand what happens before resurrection. There must be death and sadness and despair. Think about the concept of the darkness before the dawn. We all go through tough periods in our lives where we find ourselves in total darkness and facing despair. Yet there is the promise that after the darkness, the morning will come.

And that is what the number 8 heralds. The number 8 fills us with hope as it shows us that nothing dies, but rather things transform and goodness prevails. It also sometimes symbolizes rebirth. Could this be the rebirth of the political future in the United States?

Numerology and the Trump presidency

The number 8 is also known as a symbol of completion. Could this be a sign that this presidency is nearing an end?

I won’t deny that I’m a political junkie and I’ve been following the crazy state of American politics for some time now. Many experts are predicting that the end of the Trump Administration is near. Some psychics are saying that too. Others are saying that the guilty plea by Cohen and the guilty verdict against Manafort represented a turning point and the worst is over as the country moves toward a new chapter.

The number 8 seems to echo that sentiment. We’ll soon see if that prediction is right.