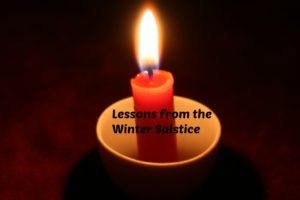 December 21, 2016 is the Winter Solstice. It marks the first day of winter and the day with the least daylight in the Northern Hemisphere. While Winter Solstice is often associated with darkness, it is actually one of the most powerful days of the year from a manifestation standpoint.

Have you ever heard the saying that it’s always darkest before the dawn? That concept refers to the notion that things tend to look the bleakest right before they are ready to turn around in your favor. The moment you feel like giving up, if you hold on just a little longer, you are often pleasantly surprised to see things turn to your advantage.  The darkest moments are also the times when we must turn to faith. When you see darkness all around you and little sign of light, you must have faith that the light will return and bring you what you are most hoping for.

The same can be said about your life. When you create something new or being the manifestation process of a better life, your change often begins at a period of darkness. After all, it is typically after we experience something that we don’t want that we start moving toward something better. While it may seem like you’re walking in darkness for a while, eventually you will be guided by more and more light.

However, just like there is only one more minute of daylight every day, the change is gradual. However, as you hold onto the faith and focus on that light, it will eventually lead you where you have been trying to go.

So how can you take advantage of the energy of the Winter Solstice?

Write in your journal about something new that you will manifest at this time. Understand that it will take a season or two to unfold. In fact, think of Summer Solstice as being the period in which you’ll see the fruits of your labor. During the six months in between Winter Solstice and Summer Solstice, try not to judge your manifestation. Just allow it to unfold in its own time. And even when you’re stumbling through the dark and feeling as if you’re not making any progress, know that the seasons dictate that your life will move forward. And simply wait for the light.