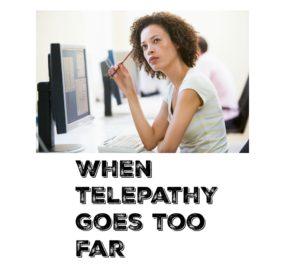 Telepathy is one of those psychic abilities that people often get excited about. And it’s understandable. How cool is it to be able to communicate with loved ones without saying a word. And mental telepathy also allows us to send positive vibes to pave the way whenever we are preparing for verbal interactions.  But can mental telepathy be used irresponsibly? When it comes to picking up on others’ thoughts or sending thoughts to others, can you go too far?

One of the golden rules of any spiritual practice is that you should only do to others what you would want done to yourself. So the question to ask yourself is whether there are certain telepathic acts that would make you uncomfortable if someone were to do them to you. I know some things would make me uncomfortable. Here are some instances where I believe mental telepathy infringes upon someone else’s personal freedom.

Black magic is the act of using Universal laws in ways that don’t benefit all. When someone tries to use Universal laws to control people or out of selfish emotions such as greed, they are taking something good and powerful and turning it into something that is dark. Telepathy can be used for not-so-good purposes. Here are some scenarios in which telepathic activities can go too far.

Using telepathy to try to control what someone thinks or does. Bombarding someone with thoughts in order to try to influence what they do is a no-no. Say you are interested in someone but they are involved with someone else. Sending telepathic thoughts that point out reasons why they should leave their significant other would be unethical at best. At worst, your actions would likely cause you to have a similar experience of someone trying to control what you think or do. Remember, what we do to others, comes back to us threefold.

Using telepathy to try to read someone’s mind. Sometimes I’m quiet because I don’t want to share what I’m thinking with others. If you’ve ever felt the same say, then you should be able to see why it’s not cool at all to use telepathy to try to read someone’s mind. What they think is their business — unless they want to share it with you. Sure, you may pick up on someone’s thoughts telepathically if they unwittingly transmit those thoughts, but you should not be trying to use telepathy to figure out what’s on their mind. You may think you’re doing it for their own good, particularly if it’s a spouse or a child, but everyone deserves privacy in their mental and emotional world. If you’re worried that someone is thinking thoughts that are dangerous to them or someone else, rather than using telepathy to try to read their mind get them professional help such as a psychiatrist.

Using telepathy to scare someone. So what if you’re mad at someone? Anger can stir up all kinds of feelings of revenge. One way you might try to get revenge on someone if you have telepathic skills is by entering their dreams and trying scare them. Whether or not you’d be successful is questionable. You probably wouldn’t be. But even the act of trying to scare someone telepathically unleashes negative energy that, again, could come back and hurt you.

The consequences of unethical telepathy

If they are psychically aware, they may even pick up on what you’re doing and could send your energy back to you with a vengeance. Telepathy is a gift and it can be used to uplift others and help two consenting individuals keep in touch. It can also be used to send an apology to someone or to send other positive thoughts to others such as thoughts of appreciation.

But if you use it for nefarious purposes, you will not come away unscathed. The Universe will see to it.