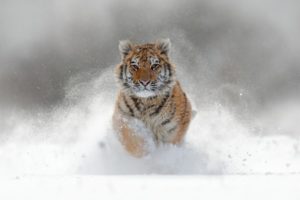 A friend made the offhand comment that she wished she could be more like her dog Rex, in that Rex spent his days doing precisely what he wanted to do, whether it be running and jumping or puttering around the house. She was joking, but it got me to thinking about animals and how they aren’t encumbered by logic and use their instincts to not only get by, but to survive. In fact, animals and intuition go hand-in-hand.

After the tsunami that killed hundreds of thousands in Sri Lanka and India in December of 2004, National Geographic reported of the many eyewitness accounts made by those who saw animals in those areas react and flee to higher locations moments before the tsunami struck. According to National Geographic, elephants screamed and ran for higher ground, dogs wouldn’t go outdoors, flamingos moved out of low areas and zoo animals rushed into their shelters. It was as if those animals sensed danger was coming.

Some scientists chalk it up to the fact that animals have to be more alert than humans because their worlds are more primitive and dangerous, so they recognized that something was amiss moments before disaster struck. But that’s precisely what it means to be intuitive. You’re alert to your feelings about whatever situation you find yourself in, and act based on those feelings whether that means leaving a crowded venue because you feel uneasy about being there, or confiding in someone you just met because you instinctively know you can trust them.

There is much we can learn from the connection between animals and intuition. In fact, if you are a pet owner and you pay attention, you may find a number of signs that your pet is psychic.

Intuitive Action Item: Next time you see an animal, watch how it responds to its environment. It’s alert to sounds and movement and when it senses danger it runs. That might seem like a simple notion, but how often do you simply act based on your gut urges without stopping to think about what you should do next?