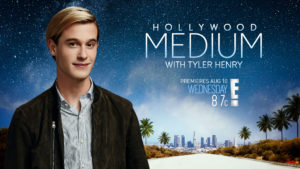 So what psychic lessons does our favorite Hollywood Medium Tyler Henry have for us this week?

The first celebrity to get a reading was actor Corey Feldman, who grew up in show business appearing in such movies as Stand by Me, The Lost Boys and The Goonies.

When Tyler arrived for the reading, Feldman admitted he was skeptical but the skepticism soon turned to curiosity when Tyler picked up on the alcoholism that had affected a member of his family.

Tyler’s reading really got interesting when he picked up on someone who had died at a young age from a drug overdose. Feldman figured out that the person was his friend and fellow child actor Corey Haim, who died in 2010.

A psychic message from Corey Haim?

The message that Tyler got was that Haim didn’t believe his full life story had been told and there were things about his life that needed to come to light. Haim made references to people who had hurt him and how he wasn’t the only one who was being hurt in that way.  He said he wished he had gone public about what happened to him.

Now if you follow celebrity news, you might know that Corey Feldman has gone on the record in the past sharing that both he and Haim had been abused as young actors by industry people.  Feldman admitted that he’s grappling with the desire to go public even more with names of people who had hurt him and Haim, but he’s conflicted about whether he should given the possible legal ramifications.

This reading shows that sometimes those on the other side feel that something in their lives has been left undone, and they reach out in the hopes that someone who is still living will push a certain project or effort to completion. What Feldman does after this reading remains to be seen.

While Feldman’s reading was the most interesting of the night, there were some other interesting moments. Evelyn Lozada of reality television fame, and her daughter Shaniece Hairston sat for a reading. Lozada was a true fan of Tyler’s and had invited other family members and her daughter’s boyfriend to attend as well, though they all sat in a different room inside of the house.

The first person who came through actually was Hairston’s boyfriend’s grandfather, and Tyler made the observation that sometimes even if one person is getting a reading, other people in a room with a medium can draw their own people wanting to come through. (Note to those who want a reading: Leave your friends at home or their dead people may crash your party).

Then Tyler received a message from Lozada’s brother-in-law who had been extremely close to the entire family. In a family full of women, he had been a protector to the entire family. Apparently he’s still looking after them from the other side, as he commented on Lozada’s love life (her nightmare relationship with Chad Ochocinco Johnson and her new relationship who her brother-in-law gave the thumbs up to.) This reading shows us that our loved ones on the other side are still checking in on our progress; they see our mistakes (yes, they really do), but they also see our growth, evolution and accomplishments. And they don’t judge our mistakes the way that we do. They’re checking our lives out from a much more enlightened and evolved state, so it’s all good.

The first loved one that came through was her horse so if you’re wondering if you can communicate with the beloved pet that has crossed over, you can.

Then Tyler described picking up on a reference to Joan Crawford and Mommy Dearest. Anyone who’s ever seen that movie can understand Hunter’s reaction: Tyler must be picking up on a crazy mother.

A psychic reading can provide insight, clarity and be an entertaining experience, as these celebrity readings show. Since Tyler is so famous, he’s pretty expensive, but you can get a more affordable reading of your own by chatting for free with a psychic.