Ronan Farrow is showing himself to be the Journalist That Could. It was Farrow who first broke the story that rocked the cultural landscape with his New Yorker article alleging that Harvey Weinstein is a sexual predator.  And that story sparked other women to come out and share their stories leading to the #MeToo movement and the fall of countless powerful men. While you probably know all that, interestingly, Farrow talks about how his inner voice kept him on the trail of that story despite setbacks, self-doubt and even threats. 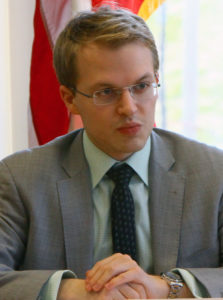 Farrow gave the commencement address at Loyola Marymount University and talked about how that inner voice kept him going.

The key is to actually listen to it despite the fact that society often values logic and taking risks only when you can guarantee success. The truth of the matter is that inner voice is typically leading us to something bigger. Intuition connects us to the world around us. It often prompts us to take actions that are bound to have an effect not only on us, but on those around us.

Read: 4 Types of Psychic Mediums. Which One Are You?

Learn how to quiet your mind; doing so will help you to discern that inner voice from all of the other chatter — internal and external — that is calling for your attention.

Use your support system

We all need support from people who we truly know have our back. If there’s someone close to you who doesn’t have your back, get rid of them. Ronan Farrow describes a real dark moment when he called his partner and nearly had a breakdown in a cab. His partner talked him down and helped him quell the anxiety so he would once again find that inner voice.

When you start paying attention to all those thoughts, you’ll find that most of them are erratic and emotional. The inner voice will not be emotional. It was be steady and it will constantly be guiding you in the right direction. It will be leading you on despite the circumstances. That’s what you should trust.