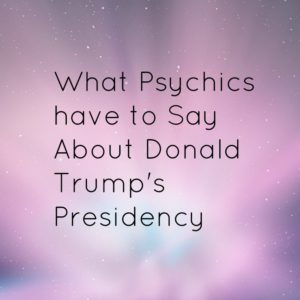 As the 2020 election gets closer, psychics are chiming in on their thoughts.

Polish psychic Krzysztof Jackowski, known for his work on missing persons cases, predicts that some type of miraculous occurrence will propel Trump to victory for a second term.

Kelle Sutliff, a psychic medium and radio show host agrees. Sutliff predicted Trump would win in 2016 and she predicted in September that he would win again. “I knew at 9:28 PM that election night that the shift would happen in his favor and he would win.” said Sutliff about the 2016 election. About this election, Sutliff believes there will be lost ballots and other Election Day chaos. She also believes that Mercury leaving Retrograde and stationing direct on Nov. 3  just throws more uncertainty into the mix.

West Seattle psychic Marc Lainhart told Westside Seattle in September that Joe Biden will beat Donald Trump, taking both the popular vote and the electoral college. However, he also feels that there is a chance for civil unrest after the election.

At the onset of 2020, psychic Nicolas Aujula shared his predictions for the new year with Coventry Life. Among his predictions: “I’ve seen lots of visions of protests — people taking to the streets, not so much just here, but all over the world.”

Aujula also shared his psychic impressions on the Trump presidency. He believed that Trump would be defeated in 2020, but he would not leave without a fight.

Predictions about the impeachment process

On December 18, 2019, the House of Representatives voted to impeach Donald Trump.  However, on February 5, 2020, the Senate voted not to convict. This may have been predicted by Nostradamus.

The great Senate will ordain the triumph
for one who afterwards will be vanquished, driven out:
At the sound of the trumpet of his adherents there will be
put up for sale their possessions, enemies expelled.

This quatrain suggests to me that the Senate will not vote to impeach him giving him triumph. However, interestingly, the quatrain goes on to suggest that he will eventually be driven out.

You can read more Nostradamus predictions pertaining to Trump here.

>>Read more 2020 predictions including whether Trump will be re-elected.

Tarot reader Seanna Rose does a reading about how Trump will be after he is out of office and suggests that he may frame it as a retirement. Does that suggest that he will resign? She also suggests that his cognitive abilities will decline in the near future.

This is one of the areas I’m most fascinated with. Maybe it’s the scientific nature of the stars, but predictions about how different aspects are expected to sink the Trump presidency have me eyeing certain dates in the coming weeks.

A number of astrologers seem to agree that the upcoming Saturn-Pluto conjunction in January of 2020 spells bad news for Trump. Challenges to authority seem likely making this potentially a precarious time for those in positions of power.

Astrosagas recently published her Trump Impeachment Horoscope and she lists several dates that she predicts will be challenging at best for the American president, including  Jan. 1, 2020 and Jan. 14, 2020 and Jan. 19, 2020. She also predicted that Nov. 21, 2019 would be difficult. That date took place in the midst of Impeachment hearings being conducted by the U.S. House of Representatives ~ here is a rundown of what happened.

Nikki, Psychic to the Stars posted her list of annual predictions at the start of 2019. Prediction No. 33 reads “Impeachment of the American Government,” suggesting that the Trump impeachment may be the tip of the iceberg.  No. 260 reads “Possible Impeachment around Donald Trump.”  Nikki also predicts a possible health scare for the president at No. 265, which is interesting in light of his mysterious visit to the Walter Reed Medical Center in November. Update: Trump was diagnosed with COVID-19 in October 2020.

If Tarot is your thing, check out Jeanne Mayell who has a forum devoted to Trump tarot readings where readers share their Tarot readings concerning Trump and how they expect his presidency to end.

One reader of the site shares that he did a Trump reading and pulled the 6 of Swords, which showed a man steering a boat across the water with a cloaked figure and a child. “I believe that after Trump does all the damage he can do to this country (and believe me things WILL get worse!) He will attempt to flee the country with his wife and son and all his ill-gotten wealth,” the poster named Grayson wrote.

There are also older predictions that may not have come true yet.  For example the famed prophet Nostradamus wrote in Century III, Quatrain 81: “The great shameless, audacious bawler, He will be elected governor of the army: The boldness of his contention. The bridge broken, the city faint from fear.” Many believe this to be describing Donald Trump and the beginning of World War III.

A number of predictions made at the beginning of the Trump presidency are proving to be true.

In January 2017, Chicago psychic Susan Rowlen told the Chicago Tribune that Trump would find himself in controversy after controversy. She told the newspaper: “We’re going to look at a president who broke so many rules — a very brash, abrupt person. He has all his ideas, but he doesn’t really have a clue how to put them in force.”

Chicago psychic Andrew Anderson also told the Chicago Tribune that Trump had some tough times ahead. He predicted that the connection to Russia would prove to be bigger than anyone imagined. By December of 2017, it was clear that both of these psychics were right.