It’s no secret that many celebrities use the services of psychics. Add Rihanna to that list. A British tabloid is reporting that the singer has recently been visiting psychics because she is worried about losing her fame. The report also alleges that the singer is lonely, which could be another reason for her decision to reach out to psychics for advice.

News recently surfaced that Rihanna broke up with her on-again, off-again boyfriend Chris Brown. Many have also criticized Rihanna’s relationship choices in the past, particularly when she decided to rekindle her affair with Brown after he assaulted her some years ago. As love dilemmas are one of the most common reasons for people to seek the advice of psychics, it makes sense that Rihanna may be looking for some guidance into her troubled love life. People often frequently visit psychics for career advice, so if Rihanna is feeling career pressure it makes sense that she might seek some guidance in that area as well.

A source told the British tabloid The Sun that Rihanna is “worried her fans could turn against her and is also convinced she’ll lose her fame. It’s made her really superstitious. She sees signs and omens in normal events. Rihanna has been to see a psychic and a fortune-teller and asked for a look into her future.”

Rihanna is not the first celebrity to be known to visit psychics and undoubtedly she will not be the last. Brad Pitt has been known to visit Ron Bard, who is known as a “psychic to the stars.” Pitt’s partner Angelina Jolie has reportedly enlisted the help of a medium to help her to communicate with her mother on the other side. Tori Spelling also attempted to use a medium to contact her late father Aaron Spelling, but she reportedly claimed that instead of connecting with her father she received a message from Farrah Fawcett. 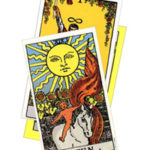 Demi Moore is good friends with Laura Day, a premier psychic, and she has spoken about her use of psychics and her efforts to trust her own intuition. When the late Patrick Swayze had marital troubles, he reportedly visited a psychic and he credits the psychic with helping him and his wife to solve their marital problems. Sarah Jessica Parker of Sex and the City fame has also been known to discuss questions about her high-profile marriage to Matthew Broderick with a psychic.

The news that celebrities frequent psychics just goes to show that they are just like all of us. Many celebrities understand that a reputable psychic can help you to not only become clear about the next steps you should take in your life, but psychics can provide hope and inspiration that troubled waters will eventually clear up.

Celebrities also tend to use psychics to answer the same common questions that many of us visit psychics for, such as relationship, money and career questions, as well as questions about loved ones who have passed over to the other side.