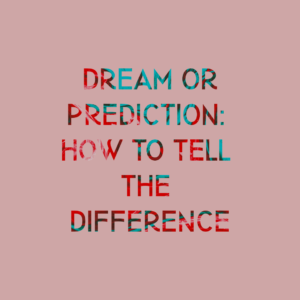 Ever had a dream that felt like it was prophetic?

I had a prophetic dream when I was waiting for my doctors to tell me whether I would have to have a major surgery. In the dream, my father, who is deceased, was standing with me looking at an X-ray. I realized in the dream that the X-ray belonged to me. My father showed me what the surgeons would do during the surgery, and he showed me that the surgery was successful.

Five months after I had the dream, I had the surgery. The dream had turned out to be prophetic.

Prophetic dreams can also be unsettling

But there’s no doubt that prophetic dreams can be troubling, particularly when they seem to foretell an event that you don’t want to happen. Some of my earliest psychic experiences were prophetic dreams, though they were not about anyone I personally knew. When I was a child, there were several instances when I would dream of a plane crash, and in the days following, a plane crash would always occur.

Whenever I had one of these dreams, I would be filled with dread because I felt like I was receiving horrible information and there was nothing I could do about it. I believe now that I had these dreams because my Spirit Guides wanted me to pay attention to my intuition and know that it is real.

I remember after the September 11 Terrorist Attacks hearing people talk about prophetic dreams they had had prior to the attack. Unfortunately, there is no way to be sure that a dream is prophetic until after the event you dreamt about occurs. And chances are if someone contacted the authorities to tell them about a dream they had of a terrorist attack, it likely would not be taken seriously, as we live in a world that values evidence over intuition.

There are plenty of examples of prophetic dreams in history. In the Bible, Joseph had several dreams that ultimately came true. In one of his dreams, he told his brothers:  “We were tying sheaves together out in the middle of the fields, when all of a sudden, my sheaf stood up erect! And then your sheaves gathered around it and bowed down to my sheaf!” While his brothers were angry that he would suggest that they would one day bow down to him, that did, in fact, happen years later.

Another interesting story of a prophetic dream involves Abraham Lincoln. Allegedly, prior to his assassination in 1865, Lincoln told some people close to him that he dreamt that he walked into the White House East Room and saw a corpse covered up and being surrounded by soldiers. Mourners also were in the dream, apparently in distress over the death of the person who was covered up. In the dream, Lincoln asked a soldier whose body they were guarding. The soldier answered, saying “The president. He was killed by an assassin.”

It is unknown whether Lincoln believed the dream was prophetic and that he would die, but those who heard Lincoln share his dream undoubtedly would wonder about that.

What to do if you believe a dream is prophetic

If you suspect that a dream may, in fact, be a premonition, here are a couple of ways you can figure out if you’re right.

Check information that can be verified

Sometimes when we’re dreaming, we dream about details that can be verified. Say you dream about a family member who lives cross-country, and you believe it was an intuitive dream. In the dream, you may have noticed that it was raining. If you check the weather for the person you dreamt about, you might find that the weather details corresponded with your dream.

Likewise, you may have dreamt about someone who lives nearby and noticed certain places in the dream. If you find yourself with that person in a place that showed up in the dream, that could be a sign for you to pay special attention.

Ask about the details

If you dreamt about someone else and you suspect that it was an intuitive dream, consider reaching out to that person and starting a conversation. Do not tell them that you dreamt about them. Instead, ask them generally how they are doing. Pay attention to the conversation and see if they mention anything that reflects your dream. 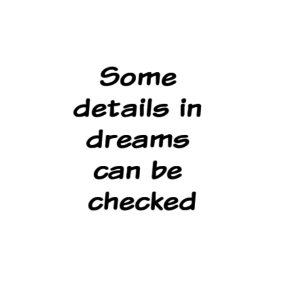 Read: Could Lucid Dreaming Be Dangerous?

You might also steer the conversation toward your dream’s subject matter. For example, if you dreamt that the person was having difficulties at work, bring up their job and ask them how things are going.

It’s always a good idea to write down the details from your dream as soon as possible. It’s so easy to forget tiny details that can make all the difference in helping you determine if your dream is in fact an intuitive message.

Should you tell someone you had a prophetic dream about them?

If you find during the course of the conversation that your dream was on point, consider whether you want to share that information, and if so, how you should best share it. Everybody isn’t going to be open to that idea.

Here are some questions you might want to ask yourself before opening your mouth and telling someone you had a prophetic dream about them.

If the person wouldn’t be comfortable hearing about the dream, do this: Simply provide advice or a friendly suggestion based on what you got from the dream without revealing any information about the dream itself.