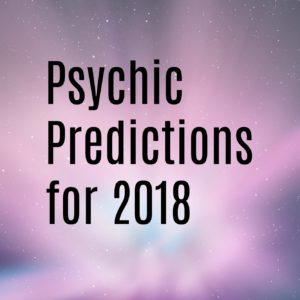 Who wants to make a psychic prediction? The only way to enhance your psychic ability is to practice using it. One of the best exercises is to use it to glean information about current events. Then, over time you’ll be able to see if you are right. So here’s an exercise ripped right from the front page of the New York Times. Today the New York Times took the unprecedented step of publishing an anonymous op-ed that shared major concerns about the Trump presidency.

The op-ed writer identified himself as a senior official in the Trump Administration. He or she wrote about Trump: “The root of the problem is the president’s amorality. Anyone who works with him knows he is not moored to any discernible first principles that guide his decision making.” The author of the op-ed went on to describe how he/she and other members of the administration are working to save the United States from Trump’s damaging impulses.

Naturally, the op-ed has sparked discussion as people wonder who the author is. While some are using deductive reasoning to try to figure it out, here’s how you can use your psychic ability.

Lay down the cards. Tarot cards are my favorite divination tool. Pull out your favorite tarot deck and pick a card.  Focus on that card and pay attention to what you notice. Is there a man or a woman on the card? What is the suit? Cups could indicate that the culprit is someone who feels a deep sense of emotion about the country, while Pentacles could indicate someone who is ruled by money. Pay attention to the thoughts that come to your mind when you look at the card that jumps out at you.

I decided to try this. I have multiple tarot card decks but decided to use my Universal Waite Tarot Deck since it has men and women on it. The card I picked was the Queen of Cups. 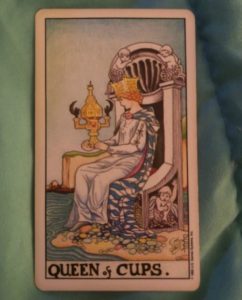 This could mean that a woman had something to do with the op-ed. And the woman had strong emotions and wanted the op-ed done because she felt strongly about things. Maybe the woman wrote the op-ed, or maybe she represented a woman who inspired the op-ed writer to write the op-ed.

The more I look at the card, I see its resemblance to Lady Liberty. That makes me think that the card is inspirational. The person who wrote the Op-Ed has a deep love of America (Lady Liberty) and this person was moved to do this primarily for this reason. (Earlier I suspected Vice President Mike Pence, but this card has helped to change my mind. The person is not ambitious about their own political futures. The person is simply concerned about the welfare of the country.)

Tarot not your thing? There are other psychic techniques you can try.

Use automated writing. Sometimes our logical mind blocks our intuitive mind. One way to get around the logical mind is to use your non-dominant hand to write whatever comes to you. Ask yourself who wrote the New York Times op-ed and then start writing without thinking about what you’re writing. You may be surprised by what you see on the paper.

Ask for a sign. And and it shall be given. When you ask for information, the Universe will provide it. However, you must be open to be able to receive it. If you want to know who wrote the anti-Trump op-ed, ask your Spirit Guides to lead you to the answer.

Sure, you can always call a psychic to find out what is happening behind the scenes of the Trump administration. Or you can take a chance and call on your own inner psychic. You know more than you think.