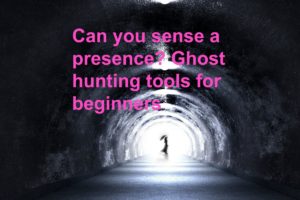 Have you ever had the suspicion that a relative who crossed over to the other side was near you? Or have you ever felt uneasy in a certain location and there was no logical reason for your discomfort? Some people who have naturally strong psychic abilities are extremely sensitive to spirits. You may be one of them.

Before you get freaked out, consider the fact that one of the benefits of strengthening your psychic ability is becoming more sensitive to the energy of those who have crossed over to the other side. Television shows such as Ghost Hunters and Paranormal State have shed light on the phenomena of ghost hunting. And since there are locations across the country that are known for having a ghostly presence, anyone reading this blog post can likely experiment with a little ghost hunting themselves.

While horror movies show all the reasons why communicating with a ghost can be scary, in reality, spirits rarely cause people harm. In most cases, spirits are less concerned with people than they are reliving a trauma that occurred to them when they were alive. If you happen upon a location where such a trauma occurred, you may literally run into a spirit.

Even if you don’t know where to look for ghosts, certain types of locations are more likely to be ‘haunted’ by the spirits  of those who choose to linger in our world rather than cross over to the other side. Places like hospitals, where death or suffering has occurred, tend to have ghost sightings. Likewise, locations where violent acts have occurred such as murder scenes and war battlegrounds also tend to have ghost sightings associated with them.

If you do decide to look for spirits, you’ll be more likely to detect them if have the right equipment. Some outlets offer ghost hunting kits

while others provide single detection items. Among the ghost-hunting tools that may help you are:

I. Digital Recorder. These are essential pieces of equipment used to detect sounds and voices that are
inaudible to human beings. We as humans do not have a sharp hearing sense like that of other animals. Think of how often your dog or cat responds to something when you hear absolutely nothing.  That’s why such a kit is so critical. These digital recorders shave different levels of efficiency with the high tech recorders being able to record extremely low sound levels. Most of them have the convenience of an internal rechargeable battery.

II. Infra-red Thermometer. One of the phenomena associated with ghost sighting is a spike or sudden drop in temperature. If you’re walking into  the room and you suddenly enter a cold spot, there could, in fact, be a spirit around you. An Infra-red thermometer is one of the most powerful and accurate measures for such drastic temperature drops. This contactless thermometer comes in different forms and designs. Some have a backlit screen, which allows for nocturnal use. Some are also fitted with a laser at the front end for directing the thermometer.

III. Motion Sensor. This type of sensor monitors even the most subtle movements around it. While these sensors are often mounted on walls close to fences to detect the presence of wildlife or animals, many people believe that they can also be used to detect the movement of ghosts. The best part is that they automatically turn on and off, which can help you tell the direction of the motion.

IV. EMF Meter. These machines are used in buildings to detect static fields like those caused by electrical radiation. They are often used to detect ghosts in haunted spaces. An object is declared haunted when it holds a fixed charge when it should otherwise not. Its meter gauge also alerts you to moving fields. This is often believed to be a sign of a spirit using energy to move.