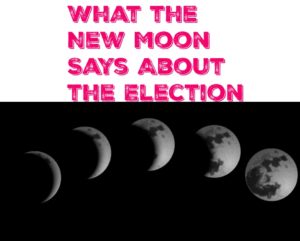 Moon cycles intrigue me. I track them religiously in order to determine the best times to do certain things. New and waxing moons are good for manifesting while full and waning moons are good for eliminating or releasing things we no longer want. So I’ll start a new project or set an intention for a new goal on the night of the new moon, and I’ll set out to banish something from my life when the moon is waning.

I also pay attention to current events that occur at different points during the moon’s cycle to see if the moon can provide any insights. So I found it interesting that the November 2018 new moon falls on November 7, which is the day after Election Day in the United States.

I’ll be the first to say that I’m a political junkie. But this particular election in the U.S. is attracting an historic amount of attention. Even people I know who have little or no interest in politics are watching cable news or joining in conversations about this election.

In fact, despite the fact that there is typically low voter participation in midterm elections, this year early voter turnout is already surpassing voter turnout in previous years. Pollsters and pundits are quick to make their predictions about who will fare better — Democrats or Republicans. I wondered if the moon might provide a clue.

So the big question is this: Republicans currently hold all the political power in the U.S. They control the Senate and they control the House. During the election, there have been predictions of a blue wave with Democrats likely taking control of the House. According to pollsters, it’s possible for the Democrats to take control of the Senate too, but it’s not as likely. So who’s likely to have the better night on Election Day?

Read: Moon magic ~ Reading the cycles of the moon

The moon might provide some insight. Technically, the moon is still waning on Election Day. That suggests that we will be in a releasing or elimination phase. Since Republicans currently have the power, that suggests that they have more to lose if we’re going to be ushering lawmakers out of Congress.

The new moon begins the very next day. It suggests that we will be ushering in a new day or a new political reality. It suggests that there will be a wave of new lawmakers who will bring a new energy to American politics rather than more of the same. Based on that, I predict the Democrats will have a pretty good night.

Some may laugh at the idea of using the moon’s cycles to predict the outcome of an election. But don’t forget that all the scientific polls of 2016 got it wrong.