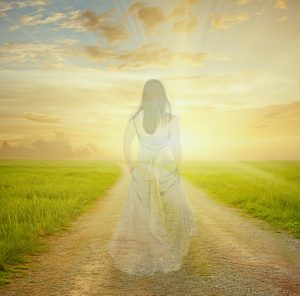 If you’ve ever lost someone close to you, or experienced the pain of grieving the death of a loved one, you may have wished that you could communicate with those on the other side. If you have an open mind and you’re adventurous, you may be able to. Many people claim to have success communicating with loved ones on the other side by participating in a seance.

I received an email advertising a seance at a local metaphysical shop. I had never attended one before, so I thought it would be fun to go. A friend of mine who is also into metaphysical topics was interested so we decided that we would set out together and see what would happen.

The seance was going to be led by a psychic medium who is known for her work communicating with the dead.

Prior to the seance, I did spend some time centering myself and thinking of some of the people who I would love to see come through. My father passed away some years ago, so I would definitely love to have him show up. More recently, one of my aunts passed away and I miss her terribly, so I’d love to see her as well. Then there’s the close friend who committed suicide a couple of years ago. I’d love to know how she is doing as well.  When it comes down to it, I realized I wouldn’t mind seeing just about anyone who has passed through my life and is now on the other side.

When we arrived, there were three other people, in addition to my friend and myself, who came to the seance. The psychic medium who was leading the seance made six.

We all sat in chairs that were arranged in a circle. Unlike television shows I’ve seen, we did not sit around a table or hold hands. Rather, we all sat comfortably, the lights were turned down and we waited.

The psychic medium said a prayer of protection, in which she set the intention that only beings of light would come through to contact us. She also told us that as our eyes adjusted to the darkness, we may notice that certain things appeared blurry. That would happen because the energy inside the room would rise as spirits filled the room.

The medium started coming up with names and descriptions of spirits who she said were in the room. In many cases, she would say the name of a deceased person that a group member recognized, and she’d share details that made sense to that seance participant. She also shared messages from deceased loved ones of those in the group.

One particularly interesting component to the seance was her ability to see past lives. In some cases, the psychic medium would describe how one or more of us were dressed in a previous lifetime. (She said she saw me in a Native American headdress.) She said this was an example of transfiguration, in which she could literally see our bodies magically transform before her eyes from the way they looked today to the way they looked in a previous lifetime.

I will say the energy in the room did rise as the seance began, and continued to rise over the course of the two hours. Some participants reported seeing orbs or flashes of light. The room also seemed to be misty at times. Then, you could literally feel the energy decrease as the spiritual activity slowed down.

Some wonder if a seance is scary. I wouldn’t call it scary; however, it definitely was an experience that made an impact.