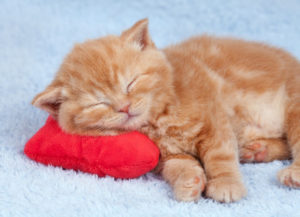 If you have a special connection with your pet that seems almost magical, you may have shared a past life with that pet. In fact, the pet may even have been an animal familiar in a past life.

I know someone who felt compelled to adopt a cat. She visited several cat adoption places. When she arrived at one place, one of the cats literally jumped up and started tapping on the glass when the cat saw her.

The cat continued to tap frantically and one of the people who worked at the adoption center made the comment that that was unusual behavior for the cat. The woman who wanted to adopt the cat didn’t do so right away. She decided to go home and sleep on it. That night, she dreamt about the cat and the cat in her dream appeared once again to be trying frantically to get her attention.

The woman ended up adopting the cat, and she describes their relationship as being almost magical with the cat knowing the woman’s moods and even coming if the woman thinks that she wants the cat to come to where she is.

Is your pet an animal familiar?

For example, a witch’s familiar was believed to be an animal — usually a cat — that had magical powers.

But there is a dark side to the history of the animal familiar. During periods in which witches and other spiritual people were persecuted, there were instances of their pets being killed as well because they were believed to possess evil powers. Some ignorantly believed that familiars were given to witches by the devil so they were inherently evil.

Animals may sense past life connections

If a stray animal finds itself at your door and you develop an unexplainable closeness to it, there is a chance that the animal may recognize you from a past life or may know that he or she is your animal familiar.

Learning how to conduct your own past life regression can provide you with insights to help you recognize who you may have shared a past life with or which lessons you may need to learn from your past.

The more you understand about your past lives, the more power you bring to your current one.