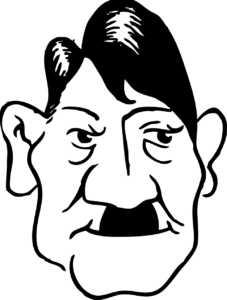 If you believe in reincarnation, it’s not a far stretch to believe that historical figures get a chance at another go-around. If we tend to carry the same themes from life to life, is it possible that Donald Trump and Adolf Hitler have a metaphysical connection?

After all, if we all have past lives, why couldn’t one of those lives be someone who was world-renowned. In fact, most people would find it pretty cool to learn that in a past life they were somebody BIG, like an Egyptian queen or a political hero.

However, there are some figures that few people would want to have their past lives associated with. One of those figures is Hitler, perhaps the biggest villain in the world’s history.

Yet, interestingly a number of web sites that deal with reincarnation have been buzzing lately and raising the possibility that Hitler may have returned in a new life, this time belonging to U.S. President Donald Trump.

Similarities Between Hitler and Trump

Some reincarnation believers say that it takes about a year for a soul to return to another body. (Others say it typically takes longer than that. In fact, seven years is often given as a common timeframe.)

Then there are the similar views. Hitler wanted to banish the Jews; at different times during his presidency, Trump has called for banishing Muslims, as well as some immigrants, particularly those from Latin American countries. And each of those men have drawn massive support from people who feel marginalized and angry.

However, there are reports that Trump has something of a fascination for Hitler. According to a Business Insider article, Trump’s ex-wife Ivana Trump said Trump once kept a book that contained speeches by Hitler by his bed. When it comes to reincarnation, people who have done past life regressions often report being fascinated by an aspect of life that was familiar to them in a past life.

>>Read:  How to Spot Historical Messages from a Past Life

Why a soul would choose similar lifetimes

There are a number of theories about why a soul would chose multiple lifetimes that had similarities.

Some believe that when a soul does not complete a task in one lifetime, that soul may reincarnate in a body and life that allows it to continue to work toward that goal. Hitler did not realize his vision of ultimate power and white supremacy. He ultimately committed suicide in his underground bunker once he knew his forces were on the losing side of World War II.

Then there is the theory that past life karma draws us to similar circumstances as those we experienced in other lifetimes. (Read: 3 Reasons You May Be Facing Past Life Karma).

It is commonly believed that groups of souls reincarnate together. If that’s the case and Hitler has reincarnated in another body, it would be likely that Hitler’s supporters have also reincarnated and may be in positions of power, as well.

Whether you believe in reincarnation or not, or whether or not you think it could be possible for Donald Trump to be the reincarnation of Hitler, it’s worth paying attention to the similarities between these two men. Lessons can be learned from history, and most of us don’t ever want a repeat of the pain that Hitler brought to the world.

It’s always interesting to hear what psychics have to say about Donald Trump’s presidency. There are a number of books you may be interested in that provide their take. Among them are: The Trump Prophecies: Updated and Expanded and Astrology of Donald Trump and the Fate of his Presidency.