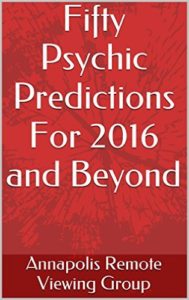 It’s that time again, when people are thinking about the upcoming new year and predictions about what will happen in 2016. This year, a number of events occurred that were apparently predicted by psychics.  Among them: the divorce of Ben Affleck and Jennifer Garner, the New England Patriots winning the Super Bowl and even the rise of ISIS.

Well, if you’re looking for predictions for 2016, you don’t have to look too far. The Annapolis Remote Viewing Group, an organization of people who work on their remote viewing and psychic ability skills together have come up with their predictions for 2016 and released them to the world.

You’ve got to admit that takes a lot of guts. They’re not just making a list of predictions and slapping them on a web site that can be edited throughout the year. Instead, they are publishing their predictions so the world can see just how accurate they really are.

The book, Fifty Psychic Predictions For 2016 and Beyond

takes on a number of topics that are currently in the news.

For example, if you’re still wondering about how the Donald Trump presidential campaign will ultimately end up, it’s in there. If you want to know what’s to come in the Middle East, there is a prediction about that as well. There are also a couple of predictions that are a little more fantastical. For example, a prediction ponders the future disappearance of Malaysian ships despite the fact that questions still remain about a missing Malaysian airliner.

If you’re a prediction fan, this book will likely delight you, and it might even give you the inspiration to start your own prediction group and see if your group will have a better grasp on what’s to come in the new year. Download Fifty Psychic Predictions here.