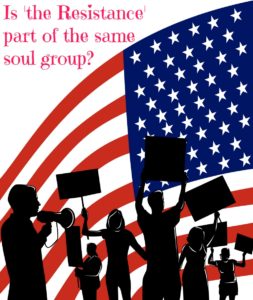 If you’ve been outraged by what’s been going on in the United States politically, or you’ve become more vocal about the state of political affairs, you’re not alone. Do you self-identify as part of ‘the Resistance?’ If you log onto Twitter, chances are you’ll see that many others feel the same way that you do. (More than half the country by many counts.) But is something bigger going on here?

Could you have been born at this time and in this place in order to participate in this movement? Could the people you march with or follow on Twitter be souls that you’ve interacted with in a past life? And on the flip side, are those who are supporters of the Trump administration souls that have been together before, working for their particular goal?

Soul groups are clusters of souls that reincarnate together over and over again. Members of soul groups often have similar goals and may incarnate onto Earth together in order to accomplish a particular task.

Many spiritual leaders agree that the political climate in the United States (and around the world) is about much more than politics. There are competing world views that are trying to gain a foothold. Humanity must make a choice between these worldviews, and those on each side of the debate have a critical role to play.

If, in fact, ‘the Resistance’ is an example of a soul group and if you are a part of it, keep these things in mind:

Be encouraged that you have found your tribe. Look around you – you may find a soulmate.

Keep in mind what you want to accomplish. Past life regression experts will tell you: It is possible to complete a life without accomplishing what you set out to do. While you will always be given the opportunity to live again and get the job done, see how much you might accomplish here today.

Stay present to your surroundings. You are being given an opportunity to make a positive difference in the world. Focus on the present so you can receive signs from the Universe and heed the guidance of your intuition.